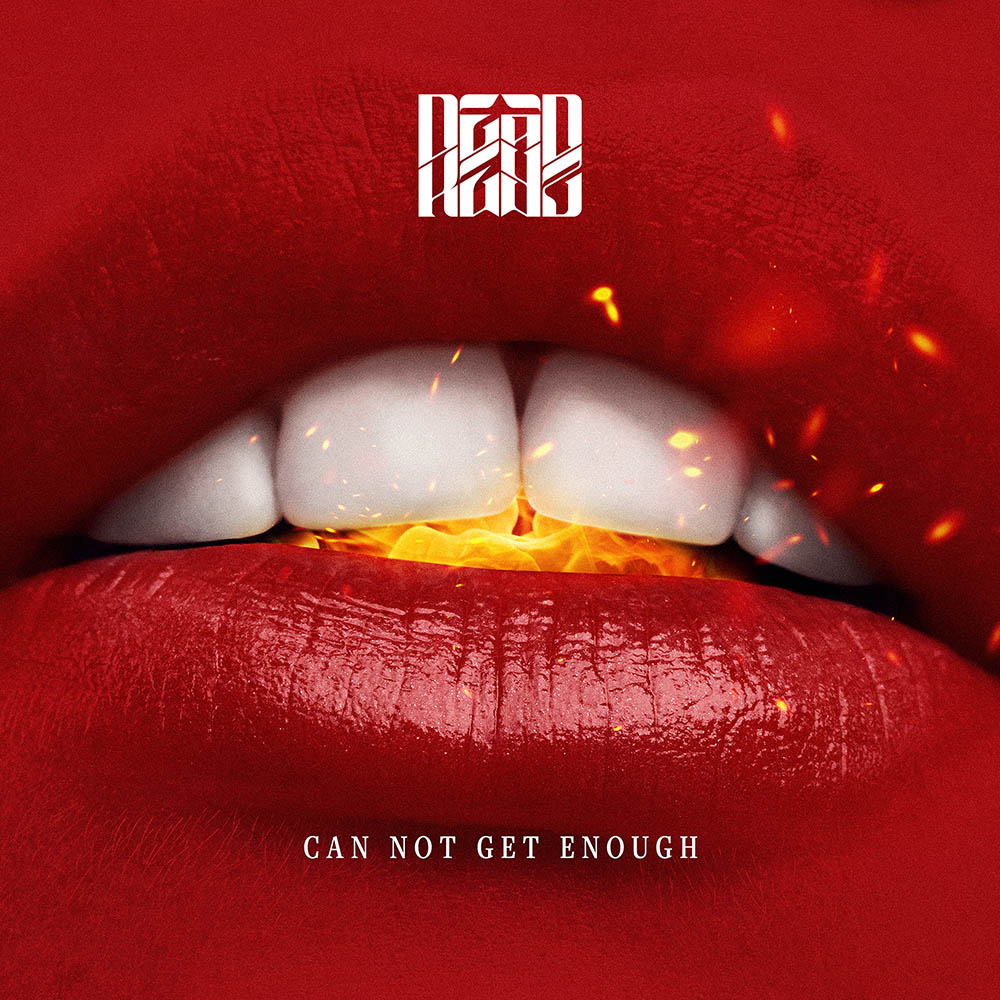 SubmitHub review
My experience in running a SubmitHub campaign to market an electro pop/EDM -track.

I ran a promotion campaign for Deadkeyz’s new single “Can Not Get Enough” via Submithub. I sent this single for Spotify playlist curators + to some radio stations and zines.

Idea behind SubmitHub is that you can contact playlisters, bloggers, radio programmers, Soundclouders and YouTubers to listen to your song for possible addition on their site/playlist/channel. This saves a lot of time since you can find them by just one service.

I have used SubmitHub earlier with some of Deadkeyz’s and my band’s other releases and the results have varied but in the end I must say that I haven’t gained a lot of publicity or streams through there so far. I’ve heard that their service is really heavily used and curators must be receiving tons of tracks to listen to.

Even though my results haven’t skyrocketed anything I have enjoyed the process since curators leave feedback when they listen the track. But a word of warning; you do need to have a tough skin concerning the negative feedback because you will get it, .. yes, even though you’ve probably just created something you are really excited about, most of the curators may not accept your song and they will tell it to you straight why not.

But if you put your ego aside and evaluate the feedback, you can learn from it. Now when I submit a new track via SubmitHub I am actually interested to see what the curators don’t like about it.

I used 80$ for my campaign and contacted total of 74 curators (some cost one credit, some two and some even three). By the 80$ I received 100 credits. I used this track in my campaign:

I targeted curators that had defined electro pop and EDM as the genres they accept. This track is a 108bpm catchy track with strong vocal melodies, so they gotta like it, right?

Results & feedback for my campaign

I sent my track to 74 recipients. From those I got 69 decisions with 9 approvals and 60 unapprovals, so my success-rate was about 13%. I don’t know if that is any good but I have done worse earlier with my campaigns so for me this result was pretty ok.

So on to the feedback! Actually when going through it I have noticed that their tone has turned to quite a lot more positive than with some of my earlier tracks. Is it that the curators are getting softer or maybe my songs’ quality is getting better (I hope the latter)? Anyway, as an example I have added here some of the feedbacks I received: 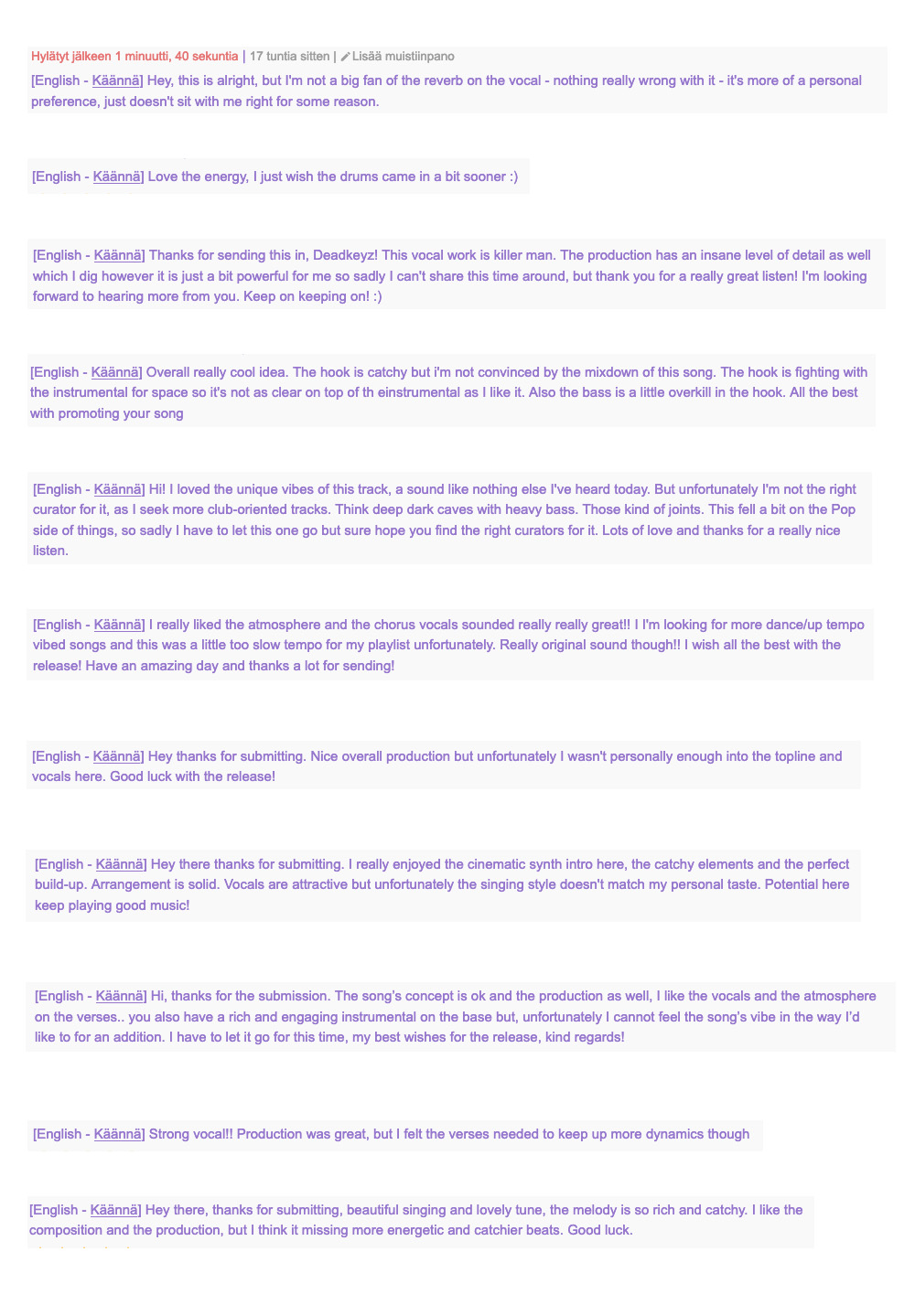 I can see point with each of these rejections, quite many of them are more personal opinions (for example the vocalists voice or the vibe of the track wasn’t the style they were looking for) instead of stating that there is something really “wrong” in the track. But believe me, I have gotten my fair amount of that kind of feedback too.

Sometimes it’s funny how these feedbacks go; with my earlier track I got one comment where a curator was saying the mix is great but composition needs work and other was saying that he loved the composition but was not feeling the mix at all. So in the end it comes to personal tastes (of course it matters too if the quality and composition of the song is good or not!).

It’s a bit of a bummer that many of the approvals don’t give feedback. It would be great to know what was the thing in the track that really hooked them. And, well who doesn’t like to hear something posivite about their work? At least it would help to lick the wounds from the negative feedbacks!

So which medias published my track?

I mainly focused the Spotify playlist curators. I also contacted couple of radio curatos and zines and got my track to some of them. Below is the list of the Playlists where my track was added. The stream numbers have been picked via Spotify for artists -dashboard and they were checked 18 days after the track’s release date. Curators usually tell you how long the track will stay on their list, typically something like 2-3 weeks.

Songs To Walk Your Dog To

EDM That Takes Me to a Mountaintop

CBN Network – Distributed the track to their DJs and played (somewhere, not sure where)

Added to a huge playlist? Hold your horses.

One thing to note here is that it is possible that if you get yourself to a list of let’s say 50000 listeners that you can end up with just couple of streams, or even no streams at all. So follow how your streams react, it may have no effect at all in worst case. I have checked my steams via Spotify for artists so they are valid numbers. Numbers are from 18 days after the release. Some of those lists added me bit later than others so they are not well comparable to each other but you should get some kind of picture for the streams they are generating.

What would help to have better results with SubmitHub?

Below are some notes from me which could help to gain better success in SubmitHub.

This would definilitely help. If your tracks are easy label to a specific genre (let’s say Future Bass as an example) then targeting the right curators would be a lot easier and you would not get that feedback that this tracks is not what they are looking for genre-vise. Deadkeyz’s music is not easy to put into one specific genre so targeting the correct curators is challenging and I do get quite a lot feedback stating that “I liked the song but this is bit too [insert an adjective here] to my playlist”.

Think about the hooks

I noticed that I had couple of feedbacks where the curator had only listened the track for 40 seconds. My track’s main hook comes around one minute. So that’s something to think about, not only when thinking about the curators but thinking about the listeners’ behaviour nowadays. It might help if the drop/chorus would come earlier or the track would tease the chorus at the beginning etc. You need something to hook the listener earlier in the song. In this track’s case I would not change the structure anyway, that’s just because I do love it the way it is, but if I would be undecided between two arrangement options, then I’d propably go with the one that is offering the main hook earlier in the song.

I received couple of feedbacks that stated that the track was great but it was just a bit lengthy for their playlist. My track’s length is 3:58 so I’d assume closer to 3:00 would have better change for approval. Of course this is not the “rule” for all the playlists but some seem to prefer shorter tracks.

Be careful with autotune

Some curators mentioned that they have a problem with tuned vocals. I have used some tuning on my track and clearly they noticed it. So if you tune the vocals think if you want to make it clear or very subtle so that it is not easily noticeable. That being said, some tracks can benefit a lot from clear autotuning, but in general it seems not to be a good idea to use it in a noticeable way, at least with the kind of music I do where the vocals are quite emotional and telling a story (not samples/loops etc).

When you get accepted by a curator, be sure to send him your next track also since clearly you have a better change to be accepted again now that the curator has shown he likes what you’re doing.

Will I do it again?

I propably will. I do enjoy this process and reading the feedback, also the negative, because I have come to terms with the fact that it’s just impossible to please everyone’s ears with my music so I’ll be doing what I enjoy but I am always interested to hear feedback and ideas and to consider them with my next release. In the end I will decide if those ideas are something I could use or if they just aren’t for me. And of course I am trying to reach more listeners so this feels like an affordable and easy way to give it a go.

Also, it’s always uplifting to get an approval, a small victory (especially this time when I finally got myself  to Greesha’s playlists(!) with this campaign; I have tried it with three of my previous tracks too, without success).

Ps. If you want to see an even wider review about SubmitHub (describing the whole process and how the system works), check out this article. I also recommend you to check this post by Will Darling from EDMtips where he had a chat with the founder of SubmitHub Jason Grishkoff about SubmitHub and its importance for musicians and producers.

Also; Check out my Spotify profile & drop me a follow!